A power drill is one of the most essential household tools. As your tool collection grows, you’ll find that an impact driver can be a valuable addition. This guide will walk you through the basics of both tools and the advantages to having each one in your tool collection. Keep reading for a breakdown of impact drivers vs. drills so you can choose the right one for your needs.

What is an impact driver?

Due to the internal workings, impact drivers can be made with a very short body, which allows access into tight spaces and reduces the weight of the machine substantially. This compactness and light weight can make an impact driver invaluable when working between joists, inside cabinets or operating in overhead applications.

What is a drill?

A drill is primarily used for drilling and boring applications and typically is better than an impact driver for these tasks. In its most basic form, a drill is a motor connected to a chuck via a gearbox. A variable speed trigger is a common feature of most drills. For the purpose of this blog, the drills we refer to could be a combination drill or drill driver – in other words a drill with or without percussion hammer facility.

When to Use a Drill

Use a drill for boring holes with drill bits, for driving small fasteners into soft wood, and for drilling into masonry.

Owning an impact drill means that you can switch to using that for all fasteners except for the smaller ones. Because an impact drill is so powerful, it tends to draw in short screws faster than you might expect. This can result in pulling in the screw deeper than you want.

One application where this is particularly important is when driving drywall screws into drywall. You need to have precise control to prevent the screw head from drawing below the paper level and into the gypsum core. A drill will give you that level of control; an impact driver will not. 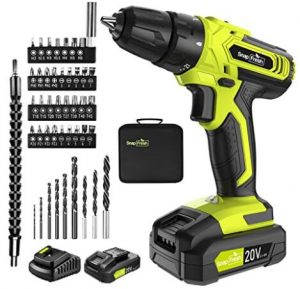 Check out the best cordless drill here: The primary use of a cordless drill is for drilling holes and driving screws. However, you can also get numerous attachments. There are stirrers for mixing paint and other liquids. You can also fit a sanding drum, a wire brush for rust removal, or a polishing bonnet. We have produced a handy guide to cordless drill uses here.

When to Use an Impact Driver

Use the impact driver when you want to drive most fasteners, except for very short ones.

An impact driver is especially good for uses like driving 3-inch screws into wood, a task that is difficult for a drill even with pre-drilling the hole. Impact drivers excel at driving fasteners into dense or knotty wood.

You’ll also want to use an impact driver for machine bolts or lag bolts.

In this section we examine the key features of drills and drivers in general, and the specifics of each type. When it comes to the hammer drill vs. impact driver vs. cordless drill/driver question, this is another way to help you decide which model to buy.

When I first set about trying to explain the characteristics of each tool, it prompted a sigh and plenty of head-scratching. Despite the machines looking similar, they are in fact quite different.

The most obvious difference between the two power tools is the physical size – I’m primarily referring to the length of the machine from the tool retaining end to the back of the casing.

We’ve already mentioned voltage or volts (V) as a measure of power. In general, 12V drills and drivers are light-duty homeowner tools. A step up in power, 20V models suit the needs of more serious DIY enthusiasts and professionals.

Currently only cordless SDS hammer drills offer more power, with 40V and 60V tools aimed squarely at contractor use. However, each type of drill and driver has specifications that are particular to their type and purpose.

Almost all drills and drivers have variable speed, activated by the trigger. However, this relies on the user exerting sustained pressure, which is easy at full speed but not so much at lower revolutions. Better tools offer two or three speed ranges, so even when the trigger is fully depressed, a slower speed is reached. This gives greater control, which is often useful when using small drill bits, or when starting to drive screws.

The method by which torque is delivered is what separates the two tools, and ultimately highlights their advantages and disadvantages.

Impact drivers deliver the highest torque when operated at their fastest speed, as this allows the biggest impact of the hammer against the anvil. Drills, on the other hand, have the highest turning force when in the lowest and slowest gear.

Although impact drivers can also be used for drilling applications, when used in conjunction with ¼” hexagon shank drill bits, the stop-start rotations are more likely to leave an undesirable surface finish. Optimised drilling speeds are often compromised with impact drivers too.

If you’ve ever heard an impact driver or drill in action, you’ll instantly recognise the noisy hammering action of the impact driver compared to the drill.

If you were to ask a user of an impact driver, or indeed anyone working in an area where they are being used, I’m certain they would mention how noisy they are. I’ve even heard some users refer to impact drivers as ‘rattlers’ because of the sound they make. The principle of a metal anvil being struck repeatedly by spinning hammers is bound to generate noise – and this is one of the drawbacks of an impact driver.

The noise from the drill comes from the motor and gearbox combined, and although you can hear it, the sound levels are certainly more bearable. Whilst we would always recommend wearing ear protection in any drilling or driving application, drills are certainly quieter than impact drivers. The exception is when impact or percussion drilling in masonry, with a combi drill.

Tips for Purchasing the Right Tool

Next to performance and functionality, the way a tool feels in hand is the most important consideration when purchasing. Good ergonomic design helps reduce user fatigue, and as a result produces a better outcome. Tool weight and balance, materials used and overall design play an important role in tool performance. A soft-grip handle alone may be the difference between an often-used power tool and one that lands at the bottom of the tool box. Here are some other things to consider:

For impact drivers, the highest torque-rated tools will offer the best fastening performance. Features such as soft grip and variable-speed triggers provide added control for all types of applications, especially those that may not require as much torque. Most models come with an LED light for working in dim environments. Make sure it’s trigger activated, so it doesn’t drain the battery if accidentally engaged.

In the case of drill/drivers, look for a tool with a heavy-duty all-metal gear box and steel-reinforced collar, a fast and powerful motor, dual speed capabilities (high and low), and a multi-position clutch. A shock-absorbing outer housing and one-piece power train, such as the Dura-Shield housing and Uni-body design Bosch offers, will help prevent against damage in the event the tool is dropped.

Overall, whether purchasing an impact driver or drill/driver, the manufacturer should stand behind the tool with a free comprehensive service and warranty program. The key is to select the best tool for the job. And for fastening, an impact driver cannot be beat for overall comfort and performance.

Can an impact driver drill holes?

In many materials, yes, though it does not have the percussive action of a hammer drill, so impact drivers cannot drill holes in brick, cinder block, etc.

You’ll either need a set of drill bits with ¼-inch hexagonal shanks or buy a keyless three-jaw chuck with a ¼-inch shank. The latter will let you use either hexagonal bits or standard drill bits with round shanks.

Can a hammer drill be used as a regular drill?

The majority can, though it is important to turn the hammer action off. That feature is designed for drilling holes in concrete, brick, masonry, etc., and punches a particular type of drill bit into the surface. If the same force was applied to standard high-speed steel drill bits it would likely shatter them.

Even if it didn’t, in soft materials like wood and plastics the hole created would be very ragged. In hard materials like metal the drill bit would bounce around on the surface and be almost impossible to control. In general, SDS hammer drills are simply too big and powerful for ordinary drilling duties.

Should i Buy a Drill, Impact Drill Or Hammer Drll?

This is a tough question to answer since there are so many different needs out there. If you are only going to buy one product, I’d go with the impact driver. New bits allow you to do everything with it that you can do with a traditional drill. You’re only missing out on the hammering action that optimizes drilling in concrete or masonry materials.

If you can afford to buy a two-tool kit and know (or think) you might need to drill into concrete or stone, go with an impact driver/hammer drill kit. Even without the special bits, the hammer drill should have a drill-only mode that allows it to operate exactly like a drill, and then you’ll also have the impact driver for when you need more torque with nuts/bolts and lag bolts. If you’re not going to be around those masonry applications, stick with a drill/impact driver kit.