How To Use A Drill Press 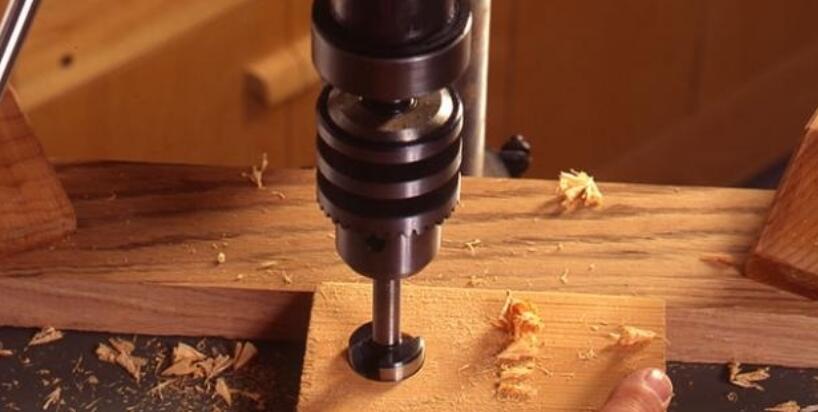 But if you’d like to get serious about working with wood or metal, a drill press will make it easier to bore precise holes, countersink or counterbore those holes and use sanding attachments.

What is a Drill Press?

If you already know what a drill press is, feel free to move further down to the next sections for lots of how-to tips and tricks. To put it simply, a drill press is a drill mounted on a column. The drill moves up and down while the work remains stationary. The big advantage is that the drill press aligns the bit perfectly perpendicular to the material. No more crooked holes! To the inexperienced, that might not seem like such a big deal, but when you start actually trying to build something, you soon realize how important it is.

If you try and make something nicer than a planter box, having your holes exactly perpendicular dramatically steps up the quality of your project. It makes parts fit together easier and more securely. Drill presses also allow repeatable holes at a constant depth. This is much more difficult when drilling by hand.

How a Drill Press Works

A full-sized stationary drill press is heavy, relatively expensive and takes up valuable floor space in your work area. But what the drill press lacks in portability, it makes up for in power and precision. Unlike handheld drills which rely on arm strength and the steadiness of the operator to drill an accurate, clean hole, drill presses are precise by design. A rotating handle controls the descent of a spinning mechanism called the spindle (the bit is held in a chuck on the end of this spindle), which can only move vertically. This makes perfectly precise holes much easier to create. All models have a depth stop, for creating holes of consistent depth.

A drill press can only drill perfectly straight holes if the table is perfectly perpendicular to the spindle. Here’s an old machinist’s trick to make your table spot-on:

Cut it to a length that will reach the outer edges of your table when the short end is in the chuck.

Chuck in the rod and then turn the chuck so that the rod’s end is oriented toward either edge of the table.

Raise the table until the rod just touches the surface and then lock the table.

Turn the chuck to position the rod on the opposite edge of the table.

Adjust the tilt of the table until the rod touches both edges equally.

Lock the tilt adjustment nut and never adjust it again.

How To Use A Drill Press?

It’s often difficult to keep a handheld drill steady, especially when drilling at an angle. Using a drill press can make things much easier.

The speed on most drill presses is adjusted by moving the drive belt from one pulley to another. In general, the smaller the pulley on the chuck axis, the faster it spins. A rule of thumb, as with any cutting operation, is that slower speeds are better for drilling metal, faster speeds for wood. Again, consult your manual for the manufacturer’s recommendations.

Open the chuck, slide in the bit, snug the chuck by hand around the bit’s shaft, then tighten the chuck’s three jaws with the key. Make sure to remove the chuck. If you don’t, it’ll become a dangerous projectile when you turn on the drill. When drilling large holes, drill a smaller, pilot hole first.

Some models have a crank that adjusts the table height, others move freely once the clamping lever has been released. Set the table to the desired height for the operation you are to perform.

If you are simply drilling a hole in a piece of stock, you may not need to adjust the depth gauge, the threaded rod that controls the distance the spin­dle travels. However, if you are concerned with a stopped hole of a fixed depth, lower the bit to the desired height, and ad­just the pair of knurled nuts on the depth gauge to the proper stopping point. One of them should stop the spindle; the other locks the first nut in place.

Before operating your drill press, be sure that the workpiece to be drilled is fixed in place. The ro­tation of the drill bit may try to spin the wood or metal workpiece, so it must be clamped to the worktable, braced against the supporting column at the rear of the machine, or other­wise secured. Never operate the tool without firmly anchoring the workpiece.

Once the drill press setup has been completed, put­ting it to work is easy. Make sure the drill is spinning at full speed, then present the bit to the workpiece, lowering the bit by swinging the rotating lever. Once you’ve finished drilling the hole, release the pressure on the lever and its spring-loaded return mechanism will return it to its original position.

How to Replace the Chuck

Once you have a new chuck, lower the quill (the drill press head) all the way down. You should see a slot on each side of the quill. Insert the small end of the taper drift tool until it stops. It will now be resting on the back of the chuck. You may need someone to hold the handles in place so the quill stays all the way down while you do the next step. Take a wooden or plastic mallet and strike the thick end of the tapered drift tool. Use a wood block and a hammer if you don’t have a mallet. After a few strikes, the chuck should fall out—just be ready to catch it!

A new chuck is half the price of a benchtop model or more, so it would not be worth the upgrade. Also, the chuck in many benchtops is not designed to be replaced. 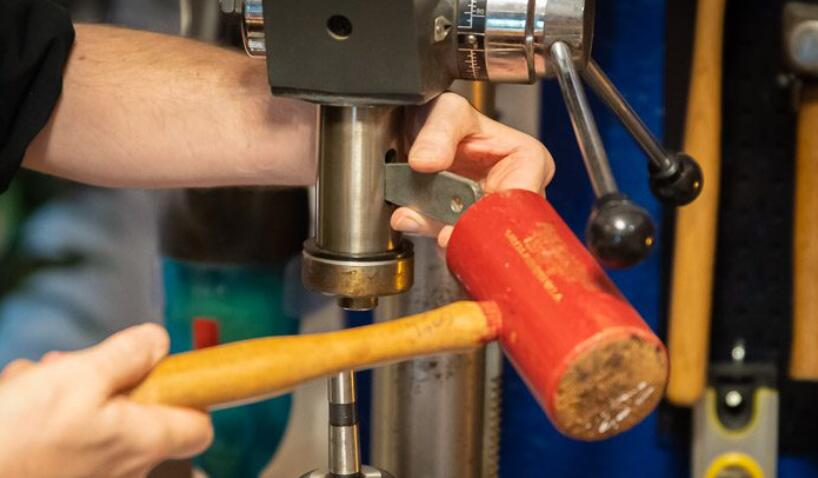 Removing the chuck on a drill press 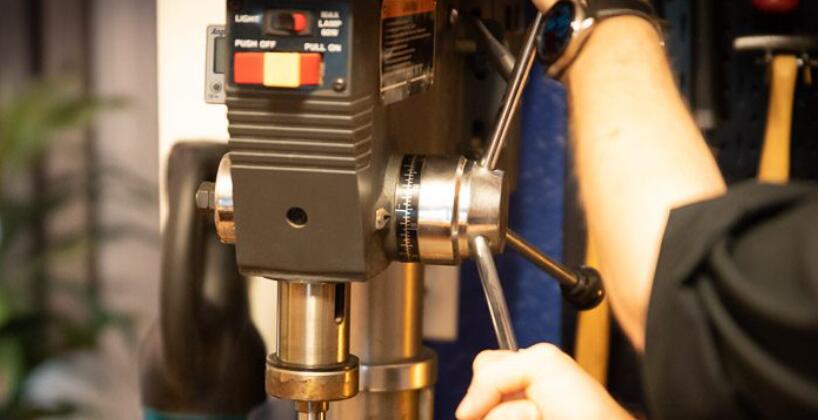