How To Sharpen Scissors 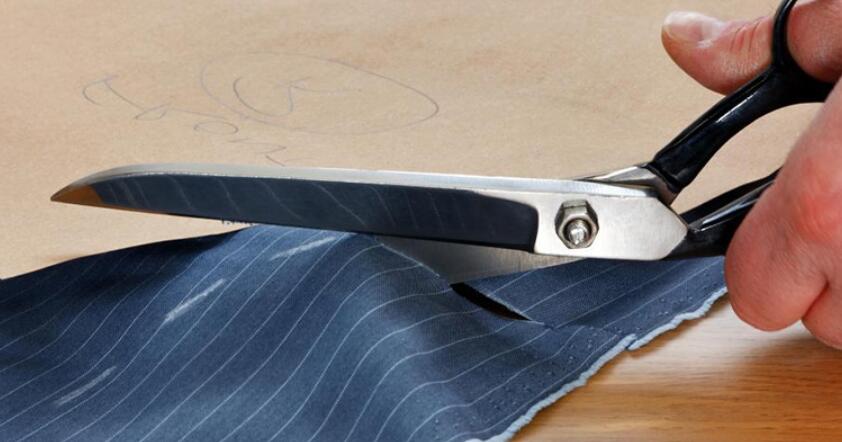 Used for cutting paper, cardboard, fabric, string, price tags, plastic packaging—that list goes on—those scissors in your office or kitchen drawer might be the most reliable everyday tool in your house. With such regular use, that trusty tool dulls over time. Most scissors are not prohibitively expensive, so when one pair dulls you may consider just going out and buying another.

But of course that’s not necessary (not to mention a waste of money) if you how to sharpen scissors. Essentially, scissors are two knives connected at a pivot point. So not surprisingly, you can sharpen scissors just as you would kitchen knives, with a couple of simple tools and some practice.

And the same is true for scissors. When in doubt, take them to a pro. But the difference is, sharpening kitchen scissors is a whole lot easier than sharpening a chef’s knife. So even if you’ve never sharpened a blade before, you can almost certainly sharpen your own kitchen shears.

Sharpening scissors is easier than sharpening a kitchen knife for a couple of reasons. One, the bevel on scissors is much wider than on a chef’s knife, which makes it easier to see the angle you need to hold the blade. And two, you don’t have to worry about honing the blade after sharpening it as you do with a chef’s knife. The scissors’ dual blades take care of that for you, with each blade aligning the burr on its mate with a few snipping motions.

How to Sharpen Scissors (with sharpening stone) 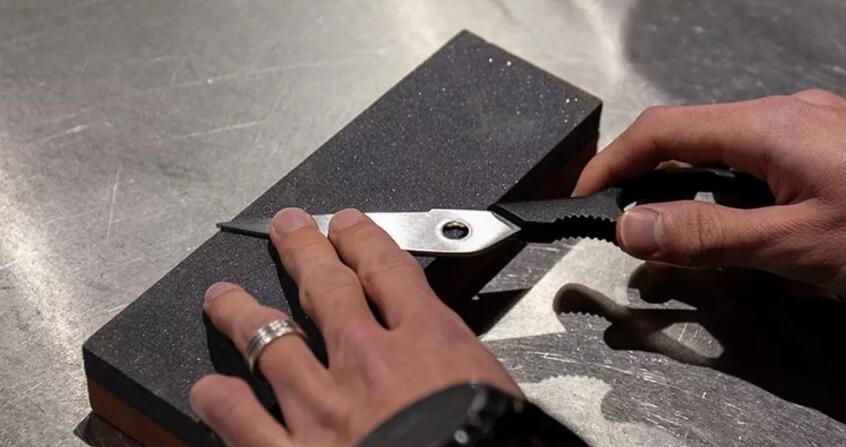 The first step is to take apart your scissors, that way you can get all the way up to the back end of the blade (the part nearest the handle) and so that the opposing blade isn’t swinging around on you and potentially cutting you while you work.

Most kitchen shears just pull apart to make them easy to clean. Some might have a nut or screw that needs to be removed first. If your scissors are simply riveted together, you won’t be able to take them apart. You can still sharpen them, but most likely it means that you’ve been using non-kitchen scissors as kitchen shears.

Next, break out your sharpening stone and turn it to the coarse side up. It might help to set it on a towel so that it doesn’t slide around.

Now, place the flat, inner side of one of the scissor blades on the stone and give it 10 strokes, from the back of the blade toward the tip, keeping the edge of the blade flat against the stone. The upper part of the blade might be slightly concave, but the edge itself is flat, and that’s what you’re concerned with.

After 10 strokes, you should see fresh metal along the edge, which is what you want, and that means you’ve done it corrrectly. You can turn the stone over and give the flat edge of the blade 10 strokes on the fine side now, but this is really optional, because once you see clean, fresh metal at the edge, you’ve done what you need to do.

Other Tools for Sharpening Scissors 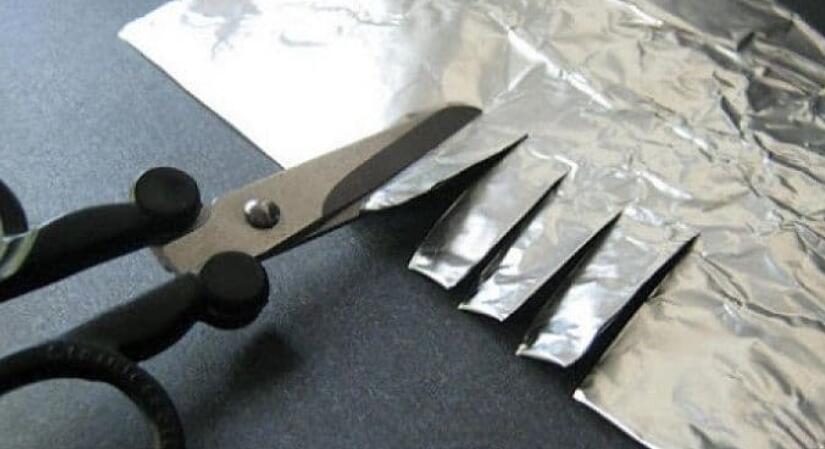 Procure a piece of aluminum foil, fold it multiple times to form a thick strip. The more layers in the fold, the better for sharpening the blades. Just like with the sandpaper, cut the aluminum foil in long strips for the full length of the blades. It will remove any burrs from the scissors’ blades. After you have achieved the required sharpness, clean scissors with a damp cloth to remove any aluminum residue.

Sharpening Your Scissors With Sandpaper 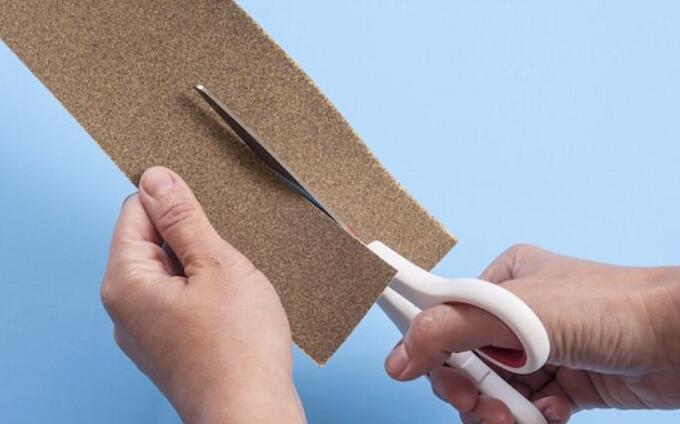 Step 1: Obtain a piece of sandpaper.

A sandpaper sheet with 150-200 grit will work just fine, but you could even go for a little bit of a finer grit (bigger grit number) if you want smoother edges to your scissor blades. Fold the sandpaper in half, with the rough sides facing outward.

Have the rough edges face outward, so the sandpaper grazes against both blades as you cut the paper.

Step 2: Cut through the sandpaper.

Cut through the sandpaper, cutting long strips, about 10-20 times.[1] You will notice that the blades become sharper with every strip of sandpaper cut. Use full scissor strokes, beginning the cutting at the base of the scissors and extending to the tip.

Cutting through sandpaper is good for scissors that aren’t horribly dull, but just need some touch up sharpening.
The sandpaper also helps smooth out nicks and indents on the blades.

Some alternative cutting materials to sharpen scissors are emery cloth and steel wool.

Step 3: Wipe down the scissors. 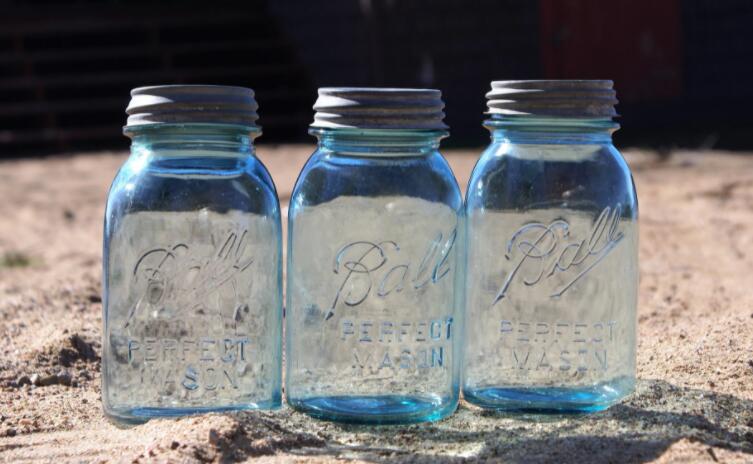 You will need an empty glass mason jar for this method. Open the scissors as much as you can and place both blades on the opening of the jar. Now move the scissors just like you would when cutting a piece of paper.

Put little pressure when ‘cutting’ the mason jar and let the glass do the job of sharpening. Repeat the process until the blades are smooth and sharp. Clean the scissors with a damp cloth. Make sure to use a jar that you do not mind having scissors marks on.

Sharpening Your Scissors With a Pin 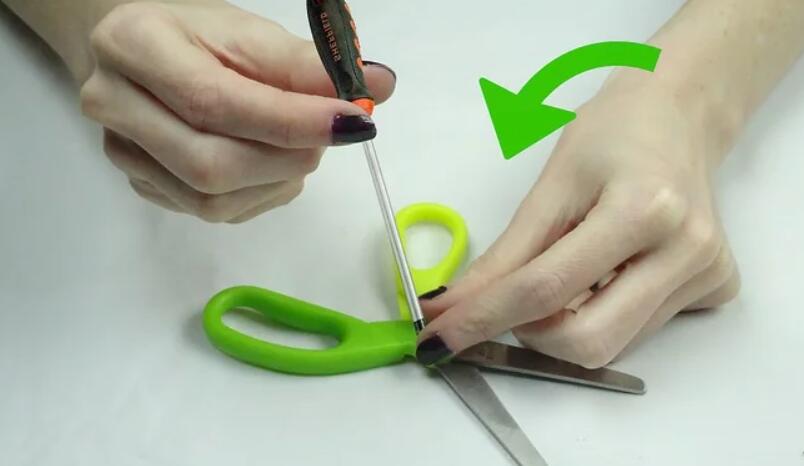 This method follows the same principle of using a mason jar to sharpen your scissors, while utilizing a smaller tool.

Using a damp paper towel, wipe down the blades of the scissors to clean off any metal bits that may have collected on the blades while cutting the pin.

How to Clean Scissors

Water and dish soap will suffice for most gunk that builds up after repeated use. Bill Tate, of Bill’s Sharpening Service in Comstock Park, Michigan, recommends using paint thinner (in a well-ventilated area) to remove any sticky residue or other stubborn dirt from the blades of scissors. For glue that’s dried on, you can also use the rough side of a sponge and an acetone nail-polish remover. If they’re rusty (from age or water contact), wipe the blades with a cotton ball soaked in white vinegar.

Oil the joint of the blades with a soft cloth to the screw area every few months. This keeps the blades moving smoothly and without friction. Mark Allen, owner of Mark’s Sharps, a sharpening and equipment-repair shop in Seattle, suggests a few drops of lightweight multipurpose oil (like 3-in-One Oil, available at hardware stores). Rub all the excess oil off before using the scissors again.

How to Properly Use Scissors

Use specialty pairs for their intended jobs: fabric shears for sewing, paper scissors for wrapping and crafts. This will keep all the blades sharp longer. When in use, get a better grip on scissors by wrapping their handles with soft linen-and-cotton twine. Roll five feet of twine into a bundle small enough to pass through the finger holes.

Beginning at the base of one handle, secure the free end of the twine with your thumb, and loop it around the handle; pass the bundle back through the loop, and pull tight to create a half-hitch knot. Continue around the handle, aligning the knots to form a herringbone pattern around the handle’s outer edge.

And remember, paper is dulling to any kind of scissors. So, keep your fabric and paper scissors clearly marked (Martha likes to use sharp-tipped permanent markers for this purpose) so that you don’t use your more expensive fabric scissors on paper.

Scissors form an integral and essential part of our day to day activities. It may seem like an invisible and old-fashioned item in the house or office but is really of great use when the time comes. However, blunt scissors can be frustrating and irritating. So knowing how to sharpen scissors with a knife sharpener is always quite handy.