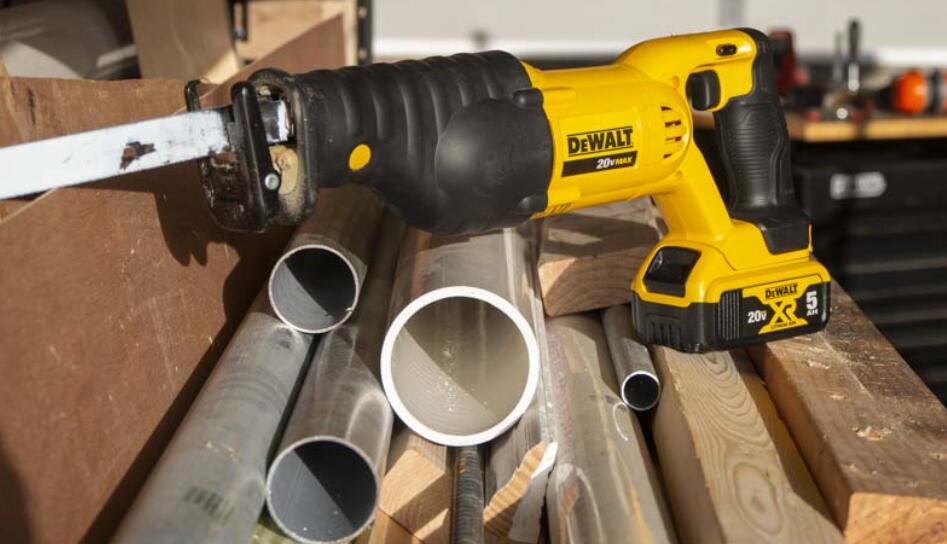 The best power solution for your cordless tools is a lithium-ion battery. A lithium-ion reciprocating saw runs longer on each charge and resists forming a “memory” if the charge isn’t run down before you recharge the battery. If you don’t already have a charger, make sure to buy a cordless reciprocating saw kit that includes a charger and batteries for the best value.

Stock up on blades, too. Beyond just replacing broken or dull blades, a wide selection of reciprocating saw tool blade types lets you accomplish many tasks. A wood blade works well for pruning trees, but if you have boards with nails or metal bolts or pipes to cut, you need a full selection of blades for each job. Cordless reciprocating saws with long stroke lengths put more of the blade in contact with the cutting surface to lengthen blade life and increase cutting efficiency. The longer the blade, the more spaces you can reach with it.

Cordless reciprocating saws run at thousands of strokes per minute so it’s important to look for a model with power management that reduces overheating. Tool-free blade clamps let you change out new blades swiftly for jobs with multiple cutting materials or simply replacing a broken blade. With a high variety of jobs that they perform, it’s crucial to examine all the features to select the best cordless reciprocating saw for your work.

The really big deal about this reciprocating saw’s performance is the power increase you get from using an 8.0Ah battery. The saw works well with any 20V max pack, including a 2.0Ah if you want the lightest weight. However, there’s a noticeable change when you get to the 8.0Ah.

That extra power was evident when we used a FlexVolt pack as well. Presumably, the 10Ah and 15Ah batteries would also provide the benefit. We haven’t tested those packs and the additional weight will add some fatigue if you want to go that big.

Cutting with a 5.0Ah battery, the performance is pretty close to what we expect from DeWalt’s standard 20V Max brushless reciprocating saw. Switching out for the 8Ah battery, you can feel the additional power when you’re pushing through a tough cut.

What’s interesting is that we actually saw faster cast iron cuts with the 5.0Ah battery. That’s not a complete surprise, though. Hard metal such as cast iron and stainless often cut faster when you slow down some. That’s one of the reasons we prefer to have a speed control dial, which DeWalt does not include. You can still feather the trigger, of course, but that’s one more thing to manage while you’re trying to control the saw.

WHAT IS A SAWZALL?

What is a sawzall? It’s not a word that’s for sure. A sawzall is essentially the slang term or nickname (trademarked by the DeWalt Tool Company) for a reciprocating saw. It’s basically one of the largest handheld power tools you’ll ever use (and it has many uses).

A sawzall is a type of saw in which the cutting action is accomplished through a push and pull reciprocating motion of the blade. A reciprocating saw is commonly used in construction and demolition work.

The sawzall is so versatile because there are several types of blades for metal, wood, or even both, and they come in all types and sizes.

What To Consider Before Buying a Sawzall

Cordless varieties operate on the highest voltage batteries that tool manufacturers make. That’s so they will have enough power. Keep in mind though, that when running continually, these saws will go through batteries rather quickly. If you do a lot of demolition cutting or other cutting where you would use a reciprocating saw, cordless might not be the way to go. There are a wider range of corded models available, than there are cordless ones. The corded ones eliminate the problem of batteries dying, and area also somewhat cheaper.

Cordless means that you don’t need to have an electrical power source available to use one of these. There are certainly times when this might be needed, especially if you’re working construction or plan on taking your reciprocating saw to your cabin in the woods to cut firewood.

If you are a homeowner or do-it-yourselfer and only need to use a reciprocating saw from time to time, you can probably get by with a budget model. I have a budget one that I’ve used for a number of years now, mostly for cutting tree branches off and then cutting them up into firewood. It works as well as the day I bought it, even though the way I’ve been using it could be considered hard use.

The number one requirement in any reciprocating saw is sheer power. When you look at the saws we have listed, their motors range from 7.5 amp to 15.0 amp; exactly double. The higher power allows you to use the saw for heavier applications. I can cut through a 4″ or 5″ branch with my 7.5 amp recip saw, but that’s about its limit. If I go for anything bigger, it starts to bog down.

Cutting metal requires much more force than cutting wood, so if you are intending to cut a lot of metal, you’ll want to have a high amperage saw. This will help ensure that the saw doesn’t bog down while you are cutting; but I’ll warn you, the saw may pull you back and forth if the blade gets bound up.

Our Top Picks of DeWalt Sawzall 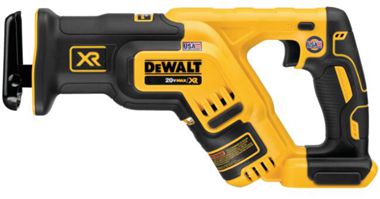 When it comes to cordless reciprocating saws, this DEWALT model is a versatile and speedy choice. The 20V MAX reciprocating saw has a variable-speed trigger and runs at a top speed of 3,000 strokes per minute. With a stroke length of 1⅛ inches, it can handle almost any job. And, the rubber overmolded foregrip and handle combined with its 6-pound weight make this DEWALT reciprocating saw comfortable to use for hours.

This cordless reciprocating saw has more than just speed to offer. It uses DEWALT’s 20V MAX system batteries (though it does not come with one) to offer more runtime and power than its 18V competitors. It also features a toolless, four-position blade clamp so users can install the blade in the most useful orientation for a particular cut. This is a versatile and strong tool for pros and DIYers alike.

The balance between size and capability is often a tough one to strike, but DEWALT’s 20V MAX XR Reciprocating Saw does it. This cordless reciprocating saw features a brushless motor and a compact design that measures just 14½ inches long. That combination allows it to fit between floor joists and wall studs while still providing up to 2,900 strokes per minute via a variable-speed trigger.

There’s a lot more to know about this saw, like its minimal weight (just 5 pounds sans battery) and four-position blade clamp. This reciprocating saw also features a 1⅛-inch stroke length, and an onboard LED work light illuminates dark work spaces while cutting. Just beware that this is a tool-only purchase, but batteries are available separately. 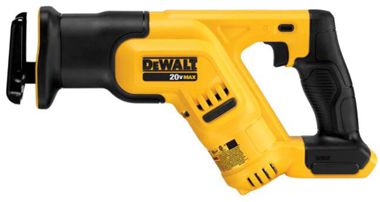 Dewalt’s DCS387B 20V MAX Cordless Lithium-Ion Reciprocating Saw is compact and lightweight with a length size that allows you fit it between studs to make cuts in confined spaces. Make tool-free blade changes with the 4-Position Blade Clamp, and take advantage of the variable speed trigger to make 1-1/8 in. cuts with every stroke. An LED will illuminate your cut line, so you’ll be able to work in dark areas or at any hour of the day.

This DeWalt model is really a professional grade reciprocating saw, not one for homeowners. This saw has a powerful 10 amp motor, providing from zero to 2,800 strokes per minute (SPM) and up to 1-1/8” stroke. The blade clamp is lever action, instead of a collar, which makes for fast, easy blade changes. Instead of having the front-end of the saw swivel, they’ve made the blade clamp in such a way that you can install the blades in any of four directions. That’s actually easier to use, as you don’t have to change your grip at all.

Reciprocating saws don’t have any safeties or guards in place that will keep them from cutting someone, so they can be very dangerous if used unsafely.

What Can You Cut with a Sawzall?

You can cut through wood (including tree branches), metal, PVC, drywall . . . just about anything besides rock. There are various blades depending on the materials, so just make sure you get the right one for the job.

How Do Reciprocating Saws Work?

The saw has a blade that moves back and forth in a rapid, push-pull motion. You use both of your hands to hold the tool, and use the blade to cut a variety of materials. It’s nice because you can also use this tool at an angle or overhead (ie., cutting plumbing pipes). It’s very versatile!

Why Do I Need a Sawzall?

Two reasons! First, a large handsaw can’t fit into small areas, and that’s where this saw comes in. A Sawzall is used for shorter, tough-to-reach cuts. It’s also electric, and uses a push and pull motion to cut, which it does quickly. Once you learn more about this tool, you’re definitely going to want to have one on hand!