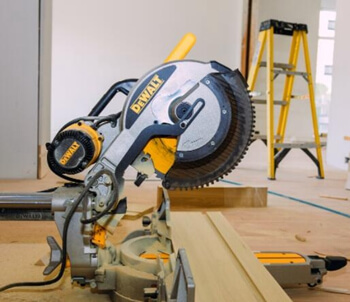 While cordless tools may rule the roost in many circles, miter saws largely remain popular as corded solutions. Still, newer cordless models seem like they may start gaining mainstream popularity. They certainly are in our shop!

We’ve reviewed, tested, and “driven” dozens of miter saws over the years. Choosing the best miter saw means looking at performance & power, cut quality, accuracy, features, and value. As usual, we gathered together some of our Pros to do the testing so we could make some solid recommendations.

Mitering is the process of fitting two boards together at an angle, so miter saws are commonly thought of as “trim saws.” If you do any type of trim work, the miter saw might be your most-used power tool.

That said, miter saws are invaluable for making other types of cross cuts as well—end cuts on hardwood flooring strips, for instance, or angle cuts on roof rafters.

Keep reading to learn more about this popular tool and to find out why the below are our top-favorite picks among the best miter saw options for DIYers and pros.

All miter saws feature a circular blade encased in a swing arm that pivots from side to side to make cross cuts on narrow strips of wood (5- to 18-inches wide, depending on the saw). One size doesn’t fit all, however, so your individual woodworking needs will determine which saw is right for you.

What is a Miter Saw?

Miter saws may look a bit like the similar larger, bulkier circle saws, but there are several differences that set the miter saw apart from its cousin. For the most part, miter saws are meant to be stationary and serve best as a more permanent fixture in a shop or worksite than smaller, easily portable saws. They’re great for woodworking professionals and, like their name states, are meant for making angled cuts. Some miter saws can slide, which gives them slightly more versatility. Even still, large-scale projects may require a different, more nimble saw, as the extra foot of cutting room that sliding miter saws provide may not be viable for handling wider materials.

Saw blades also matter though these can be switched out as needed if you prefer a particular saw’s body but aren’t thrilled with the blade that comes with it. As a good rule of thumb, when it comes to the teeth of a saw blade, the more the better. More teeth lead to a more precise, refined cut. Fewer teeth are really only ideal if you’re looking to get rid of material at a quicker rate and are less concerned about the finish.

How To Choose The Most Accurate Miter Saw?

Above I have labeled what I believe to be the five best miter saws on the market today, you may be asking how I came to this conclusion. As a contractor, I have a great deal of experience in using these saws, so I wanted to look at several features, and I have listed what I believe to be the best features to help finish a project as quickly as possible. The first thing I wanted to talk about is the difference between a compound miter saw and a sliding compound miter saw. While they may sound and appear similar, they provide you with two different options and depending on the project; you need to know what saw will do the best job.

If you plan to work with multiple blades, you should focus on searching for the best miter saw that offers an easy blade replacement feature. This is necessary when you work with varied materials which require the use of different compound blades.

Dust collection is something that not a lot of people consider but working on a job site can put all kinds of dust and debris in the air. I like to see if I can cut down on as much dust as I can, not only is this better for the worker’s health it also makes cleaning up easier.

It also allows you to see the area you are cutting by preventing dust from going all over your wood. A lot of the saws have a dust collection area, so as you are cutting the dust is forced down into a basket that will hold the dust until you are done. This makes for the easiest cleanup.

The power of motors for miter saws varies from 10 to 15 amp. A more powerful motor isn’t always necessary as these tools are efficient by default. Larger saws will always have more powerful motors than smaller saws, so don’t be fooled by the numbers alone. However, if you plan to run the equipment on a regular basis, you should go for the highest level of power.

Either way, you don’t want to buy something that isn’t going to give you the results you want. So I highly recommend you buy a saw that is powerful enough to accomplish any task you may need it for.

Having a strong motor and the right blade is one thing, but most of us are looking for a saw that will make precise cuts at several different angles. One thing you want to look for is what we call positive stops.

This refers to preset notches made in the bevel adjustment mechanism. These are used to set the angle of bevel adjustments quickly. They increase the productivity and speed of your work with the saw. The more varied these stops are, the easier it will be for you to use the tool. However, make sure that the saw does not only offer several positive stops but also offers you a chance to make custom incremental adjustments. 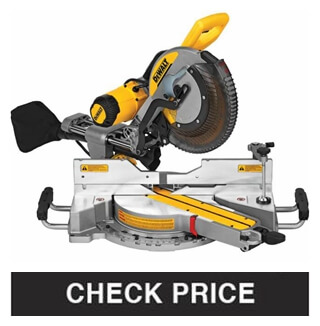 The DeWalt DWS780 is a superb option for those looking purchase their very first miter saw, and is very-much the ideal saw to consider if you’re contemplating upgrading to a sliding compound miter saw.

Suitable for both hobbyists and professionals, the DeWalt DWS780 offers damn near every conceivable feature necessary to effectively slice miters and bevels with precision.

The DeWalt DWS780 is dual bevel sliding compound miter saw, meaning the blade on this miter saw tilts in both angle directions, allowing you to make precise cuts without needing to calibrate or adjust anything.

Given the design of the back fence, you can cut up to two by 16-inch lumber at 90 degrees. At 45 degrees, you can cut two by 12-inch dimensional wood.

DeWalt have fitted a robust 15-amp motor, and it has a lot less vibration than what you’ll find with other similar saws, especially given the powerful 15-amp motor it possesses. For safety features, you’ll get a transparent blade guard that is pretty standard. 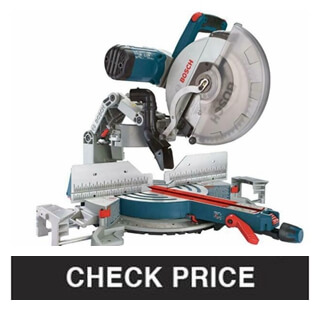 The Bosch GSM12SD Axial Glide miter saw provided the smoothest cutting we’d ever experienced thanks in large part to its axial glide system rather than standard rails.

Our best compound miter saw launched way back in 2010. It still beats nearly every other saw we’ve used for tall standing crown cuts and vertical base clearance. Bosch still makes this sliding miter saw and its newest models seem to focus on more maneuverable 8.5-inch saws. Those also come in both corded and cordless models.

When making this recommendation, we took into account our entire catalogue of sliding compound miter saw reviews. The Bosch Axial Glide remains one of the most powerful saws with the absolute best cut quality. Since it also allows for some of the highest trim clearances across the back fence it reigns as the best dual compound miter saw. 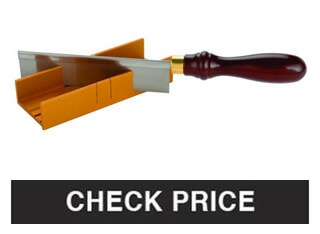 If you build dollhouses, models, picture frames, or other crafts that require detailed work on very small pieces, you probably don’t need a large, powered miter saw. Instead, you’ll find a miter box, such as the one from Olson Saw, to be highly effective for your needs and your budget.

Basically, a miter box is a metal box—this one is aluminum—with slots for positioning a small hand saw at just the right angle for making accurate miter cuts. The box has three 0.14-inch slots: one each for 45, 60, and 90-degree angled cuts. You can cut materials up to 2 inches in width and 7/8 inches in depth.

You’ll also get a wooden-handled fine kerf universal saw with a 6-1/2-inch, 42-teeth-per-inch blade. The saw easily cuts through balsa and other soft woods, plastic, copper, and brass, leaving behind smooth edges without any ragged spots requiring further sanding.

The Olson Saw Miter Box is the perfect addition to any crafter’s toolkit, or as a useful tool if you want to cut a few pieces of wood or other materials to use as trim on furniture or around the house.

A mini miter saw may sound counterintuitive, but this eight-inch version works phenomenally for hobbyists and model makers. Despite its small size, it still cuts precisely and can create those angles, albeit in smaller dimensions.

This model comes with three saw blades to test out as well as a petite frame and table. “I work with stained glass and have been using a hand saw to cut zinc for the frames,” wrote one customer. “This saw makes that process much easier and you get a super clean cut that looks so much better. Worth every penny!” 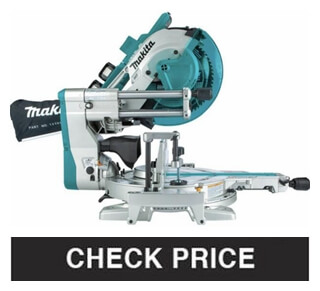 It was very hard not to give the Makita XSL08PT the #1 overall spot in our best miter saw reviews article, even over corded models. Price allows the dated Bosch Glide Miter to barely edge it out.

There’s so much to like about this saw, it’s hard to know where to start. For starters, it doesn’t feel like you’re cutting with a cordless miter saw. There’s simply no compromise in power and the direct-drive motor is incredibly confident cutting through all of our test materials.

We found absolutely no blade wobble while cutting. You simply get perfectly consistent cuts on trim, base, and crown every time. It also cuts 5-1/4″ speed base upright at 45 degrees in either direction and miters left and right to 60 degrees.

Finally, you get a ton of convenience features—like front bevel adjustments and a rail design that lets you put this saw right up against a wall. Run-time surprised us as well. We cut an entire day’s worth of crown and base off a single pair of 5Ah batteries!

A 90-degree angle cut is a straight cut. Miter cut is when you make cuts that are angled right across a board’s width.

Miter saws also make bevel cuts, which are angled cuts that are made by cutting across the thickness of the board. You can often use circular saws to do both miter and bevel cuts, but it isn’t always well-advised.

What type of cuts can I make with a miter saw?

In most cases, the blade in a miter saw is mounted on a rotating arm that can pivot from 45° to 90° allowing it to produce straight and angled cuts.

The blade in the 12-inch miter saw is heavier, which is why it spins a lot slower. It’s also more expensive than the 10-inch miter saw, which spins faster and is more portable due to its size and weight.

What’s the difference between a circular saw and a miter saw?

Circular saws are very useful for straight cuts both across the grain (crosscut) and with the grain (rip cut). They are an excellent choice when you need to cut a large piece of plywood down to size, or perform other basic cutting activities. Circular saws are the best choice for framing or other construction projects. With the right blade, they can also cut masonry, concrete, and even metal.

Miter saws, on the other hand, are best used for angled cuts, including miters and bevels or a combination of those two cuts, although they can also make crosscuts. They aren’t so useful for ripcuts, however, nor are they often used to cut metal or masonry. Miter saws are the best choice if you need to cut a lot of angles; for example, when cutting baseboards, crown molding, trim for cabinets, or when building furniture.